After a number of wolfing runs, I decided to sit down and play out a pair of Treehugger norns in real time. So, allow me to introduce to you: Alessio and Alita, my starter pair for this game. This is them as adolescents: 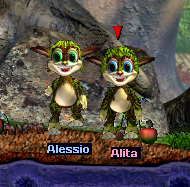 As babies, their lives were pretty uneventful, and they were quite healthy, so there's not much to say about that. But shortly after reaching childhood, things sort of went sideways for a bit- for Alita in particular. I noticed her shivering often, and asked her what was wrong. Still shivering, she told me 'Alita very ill'. Taking her answer at face value, I picked her up and took her straight to the medical bay.

Placing her in the containment chamber, I started up the medical monitors and right away, I found the cause of her ailments: 1 bacteria detected, and a disconcertingly high level of injury and Antigen 3 in her system. For anyone not familiar with C3's chemicals, the primary physical effect of of Antigen 3 is coldness, which explains her shivering. More concerning though, was the physiological effects of Antigen 3, which attacks the creature's central nervous system's drive support lobe, fearly drive overwhelmsion, fight or flight, gonad, and regulatory functions.

Essentially, if left untreated, it renders the creature incapable of: caring for itself, mating, and unable to maintain homeostasis. Those first and last effects can lead to a slow, painful death.

Paging through the chemicals available to me, I loaded up a full syringe of Antibody 3, which specifically targets Antigen 3, and pushed it into her system. I always feel a little guilty when a norn yelps from the needle jab and I see their injury level go up, but mild short-term pain is better than long-term suffering.

I watched closely over the next little while to make sure the Antibody 3 injection was starting to do its job, and sure enough, Alita's Antigen 3 levels slowly started going down. Feeling like she needed a bit of a safeguard against future infection, I decided to vaccinate her against all the other antigens, as well. Seeing on the monitor that the bacterial infection and its effects were gone, I pulled her out of the tank and returned her to the Norn Terrarium. Unfortunately, her illness seems to have left her with a permanent limp in her right leg. Nothing serious, but still a life-long reminder of what was narrowly avoided.

And of course, I got back from the ER with Alita only to find Alessio had apparently tried to drown himself in the Norn Terrarium's pond... the doofus. So, dropping Alita off, I pulled Alessio out of the water and hauled him off the the medical bay to make sure his respiratory system was still working right. Thankfully, it was, and I quickly returned him to his future mate, no intervention needed.

Other than that, I've just been gunning down Grendels when they enter the Norn Terrarium every so often, and wondering what broke to make it so that there are no Ettins in the world yet.

And with that, stay tuned for future updates on Alessio, Alita, and any future offspring they might have!
Posted by Alkalide at 5:47 AM No comments:

A Taste of What's to Come

So, just for kicks, here's a quick sneak peek of the primary features I'm working on implementing for the Alkali Norns:

Alkali Norns were named so due to their metaphorical similarities to the alkali metals on the periodic table of elements:

Those are just the 4 main attributes. I'm going to be including at least 9 other additional genetic factors for them as well, but I want those to remain a secret until I'm ready to release them. What fun is a new norn breed when you already know everything about them before you get to play with them?
Posted by Alkalide at 7:31 AM No comments:

Along with the Alkali Norns, I'm also in the early concept stage of creating an entirely new metaroom for Creatures Exodus, possibly to go with them. Currently, it's going by the rather un-creative name of the 'Sanctuary'. The idea is to include a number biomes (each with their own distinct micro-climates and ecosystems) contained in and around a mostly-dormant volcano that rises out of the ocean.

Posted by Alkalide at 5:28 AM No comments:

Along with the early work on the new norn breed, which I'm calling Alkali norns (because of heir behavioral and visual likeness to the alkali metals on the periodic table of elements) I'm also considering doing mock-ups of what a modern Creatures game might look like. Or, at least what I'd want it to look like.

Having said that, I'm working on a 3D model of a norn, based very closely on the Creatures 3 and Docking Station norn sprites, which I plan on importing into Unreal Engine 4, to get a feel for what a 2.5D and full-3D norn might look like in a contemporary tripe-A 3D game engine.

The Unreal Creatures Project, as I'm calling it, is probably never going to be anything more than a visual tech demo (i.e. there won't be any gameplay) showcasing the model, a small environment with props, and animations for the models. Never-the-less, if I feel like I can take it further than that, or if someone wants to help me with that, I'm open to the possibility.

Below are the screenshots of the initial setup in Blender: 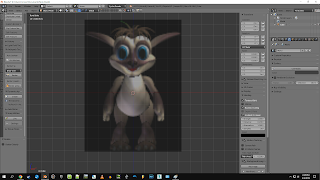 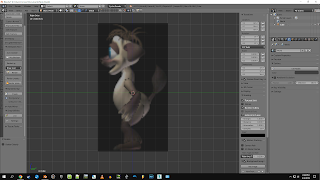 Posted by Alkalide at 3:33 PM No comments:

The Blog Has Hatched!

The blog is now up and running!

This will be the place to find news on all my Creatures activities, from playing the game to developing breeds, agents and metarooms for it. I already have a new breed in the early stages of development, so there will most likely be more news on that in the coming weeks.

After nearly 17 years, it's good to be back.
Posted by Alkalide at 4:59 AM No comments:

Alkagen Creatures is a blog dedicated to chronicling my personal gameplay and development projects in Creatures Exodus.